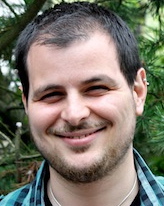 Dr. Rubano is a 33-years-old scientist, who got his PhD degree in Fundamental and Applied Physics (with highest mark) in the University of Naples - Federico II, at the age of 28. His scientific activity was mainly devoted to study the wide class of materials named Strongly Correlated Electron Systems (SCES) by means of Linear and Nonlinear Optics. During the first period of his PhD work, Dr. Rubano focused on the field of High Tc Superconductors (HTCS). He has built the experimental apparatus and investigated the low-energy excitations of HTCS by means of a the third-order nonlinear optical technique named Coherent Raman Scattering (CRS) and he measured the CRS spectrum [3] of one of the most representative material of this class, YBa2Cu3O7. Compared to the well-established Linear Raman Scattering, CRS can measure the phase of each single resonance with respect of the non-resonant electronic background. Furthermore, CRS allow a selective excitation of a single resonance and, thus, the observation of the relaxation dynamics of the system, in a Pump-and-Probe scheme. During the second period of his PhD work, Dr. Rubano moved his interest to the field of perovskite-oxides, which is his currently his main research topic. He studied, in quite detail, one of the prototype perovskites, the strontium titanate SrTiO3 (STO). He investigated the spectral and dynamical behavior of the STO photoluminescence under intense UV-light. This intensive study [1,2,4,5] shed light both on basic issues regarding the nature of charge carriers in STO, as for instance the possible presence of self trapped polarons, and on technologically relevant issues (switching speed, optical bandwidth, etc.). From February 2008 to December 2010, Dr. Rubano continued to carry-on his research career as a Post-doc at the University of Bonn, in the group of prof. M. Fiebig, one of the leading European groups in Nonlinear Optics on Solid State systems. There, he gave his contribution to the study of the dynamical properties of the antiferromagnetic (AFM) order parameter in nickel oxide (NiO), establishing an international collaboration with Dr. T. Satoh, Univ. of Tokyo (JP) and with the group of Prof. T. Rasing, Radboud Univ (NL). By means of optical Second Harmonic Generation technique (SHG), he has measured the AFM order parameter in a wide dynamical range. He demonstrated that an intense pulse of light (Pump) generates a coherent superposition of different spin states having different orientations. In addition, he clarified the coupling between the Pump-pulse duration and the order parameter reorientation, showing that a fully reversible and three-dimensional switching of the NiO AFM state is possible. The relevance of these findings [6] in the field of AFM physics is clear from the point of view of fundamental research, but it has also very interesting consequences on the magnetic-memory device technology.

Within the same Post-doc period, Dr. Rubano turned his interest again toward his main research field, but this time with more emphasis onto the novel interface-related phenomena, in particular the LAO/STO interfaces, and similar materials. Within a self-established collaboration between Prof. Fiebig’s, Prof. Marrucci’s, Prof. and J. Mannhart’s groups (later on including also Prof. J-M Triscone in Geneva University, Prof. D. Schlom at Cornell University and Prof. J. Fontcuberta at ICMAB-CSIC Barcelona) he investigated these heterostructures by means of SHG. Exploiting the interface-induced enhancement of SHG, Dr. Rubano measured the first existing SHG-spectra from these interfaces. By studying a surface-related resonance (not detectable using bulk-only sensitive linear techniques), he clarified that the electronic reconstruction leading to the onset of the 2DEL is preceded by a polar rearrangement of the interface, where a charge transfer takes place before the onset of conductivity. This rearrangement happens within few STO monolayers and consist in a structural reorganization which relocates the titanium ions [7,8]. This work was followed by more detailed experimental and theoretical studies, including low temperature spectral features, the formation of polar domains along the interface plane and a more general SHG theory for perovskite interfaces [9,11,12,13].The sheet-carrier dynamics was also investigated in a Pump&Probe scheme, and the work is now under consideration. In January 2011, Dr. Rubano successfully applied for a Max Planck Fellowship at the Fritz Haber Institut von der Max Planck Gesellschaft, in Berlin, in the Physical Chemistry Department of Prof. Martin Wolf, Nonlinear Optics group of Dr. Tobias Kampfrath. There, he has built a Time Domain THz Spectroscopy (TDTS) setup introducing some novel technologies to improve the signal-to-noise ratio, updating the setup to perform THz Ellipsometry and he studied the doping charges low-frequency response and phonons in Nb-doped strontium titanate [10]. He was involved on two main projects in the group, one concerning the THz Emission Spectroscopy from magnetic and non-magnetic interfaces and about the THz-pumping of magnetic systems, and one concerning the ultrafast pulse switching in the THz domain [14].  In 2012 he won the Seed Project 2012, a project-call of the Italian National Research Council CNR-SPIN Institute. In January 2013 he won a Marie Curie European Grant (Project Call: FP7-PEOPLE-2012-CIG. Project title: “FOXIDUET”).

Since October 2012 he is working in “Dipartimento di Scienze Fisiche”, University Federico II (Napoli, Italy) as a Post-doc.